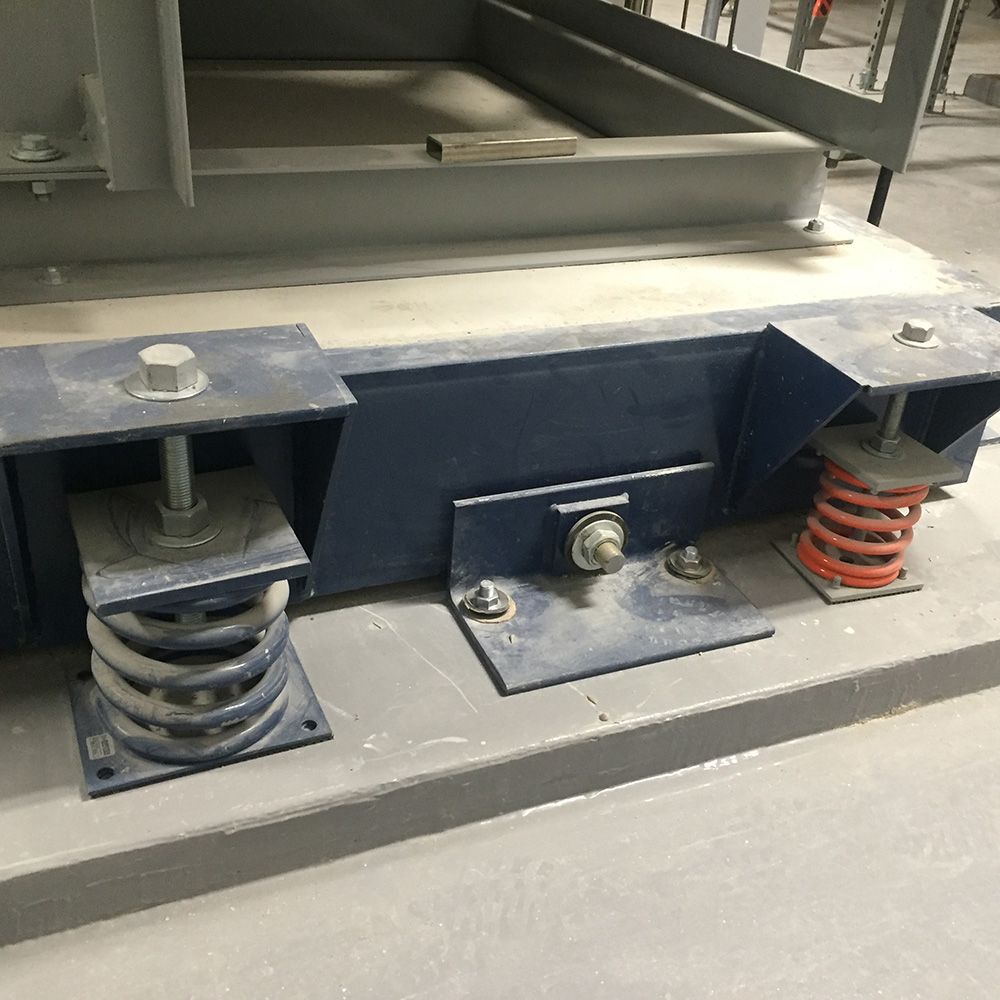 Kinetics Model HS-5 Seismic Snubbers are designed for use in locations subject to earthquakes, high winds, or other external forces which could displace resiliently supported equipment.

Model HS-5 Seismic Snubbers are intended to limit lateral and vertical equipment motion when placed at the base of vibration-isolated equipment and when securely anchored to the building structure.

Model HS-5 Seismic Snubbers are designed to be used in pairs and will keep supported equipment contained when this equipment is subjected to lateral or vertical forces within the product's design capabilities along any axis. HS-5 Seismic Snubbers can potentially be used with high center-of-gravity isolated equipment once required restraint forces have been calculated and compared to the snubber strength capabilities.

Building codes in many geographic areas require building components to be capable of resisting forces encountered during a seismic event.

Equipment mounted on resilient supports, such as coil spring, neoprene, or fiberglass vibration isolators, can undergo large motions relative to the building during a seismic event. By using properly spaced and designed resilient snubbers around the base of the equipment, this motion can be limited and the equipment can remain in place both during and after the event.

Kinetics Model HS-5 Seismic Snubbers are rugged, heavy-duty products which have been designed to resist imposed forces from external forces. The snubbers remain out of contact during normal equipment / building operation in order that equipment vibration will not be transmitted into the building.

Many applications may require only two (2) HS-5 snubbers since these restraints are capable of withstanding forces in any direction. Note that variations in the equipment center-of-gravity and the specific configuration of the isolated equipment might require the use of additional snubbers.

Kinetics model HS-5 Seismic Snubbers are to be installed such that the neoprene bushing attached to the base anchor will come into contact with the interior surface of the floor mounted angle restraint bracket once the equipment has been displaced approximately 1/8" (3 mm) in any direction.

Equipment, equipment bases, concrete inertia bases, structural lateral supports shall be restrained against excessive motion during a seismic event by the use of resilient snubbers designed to meet a specified 'G' loading or to meet current building codes. A registered professional engineer shall design the snubber steel members, or certified test reports shall be submitted which verify the capacity of each snubber.

Snubbers shall be fabricated from structural steel and shall be attached to the building structure in a manner consistent with anticipated loads. Snubbers shall meet all current seismic building codes.

Snubbers shall be placed around equipment as shown on drawings so to limit lateral or vertical motion at each snubber location to 1/8" (3 mm). A minimum of two (2) snubbers shall be installed around each resiliently supported piece of equipment.

Snubbers shall include resilient neoprene pads with bronze backing to cushion any impact and shall be installed and inspected so as to be free of contact during normal non-seismic equipment operation.